Help Page and Knowledge Base

“Laser” stands for “Light Amplification by Stimulated Emission of Radiation”.
Laser emits light coherently which allows a narrow spectrum laser beam and a focused light spot on a targeted surface.

“mW” stands for mill watt. It is the output power of a laser. “mW” means one thousand of a watt.
The output power will determine how powerful the laser will be.
A low powered laser pointer among 1mW-50mW is basically used for presentation; A middle powered handheld laser is applicable for military targeting, burning and thermal experiments; A high powered laser is mostly applicable in medical care, military, industry and surveillance etc.

Wavelength is always described in nanometer, and determines the color of the laser. Our eyes are sensitive to light with very small region of the electromagnetic spectrum named as “visible light”.

Laser radiation refers to a laser device that produces and amplifies light. There are different kinds of laser radiations. Some laser radiations are in the form of visible light, other emits radiation that is invisible to human eyes, such as UV or infrared radiation.

Improper operations of lasers are extremely dangerous. The intense laser radiation such as exposure can cause serious injury to skins and eyes permanently. There are even potential hazards from invisible laser radiation until it is too late.

High power infrared lasers can cause skin burns if skins are espoused to infrared light. Exposure to infrared spectrum lasers my result in erythema, skin cancer, skin aging, dry skin effects, and photosensitive reaction in the skins. Mid-infrared lasers, particularly those operated at fixed wavelength with strong absorption in the cornea can also cause painful corneal injuries.

Ultraviolet lasers can cause corneal flash burns, a painful condition of the cornea. Ultraviolet (UV) can cause photokeratitis and cataracts in the lens of eyes. They can lead to changes in pigmentation, erythema (sunburn), and (most important) skin cancer.

The output power is related to the produced power of the laser beam, which is usually stated in milliwatt (mW). The milliwatt is a unit of power, which is one one-thousand of a watt. Higher power lasers are always more powerful than lower power lasers 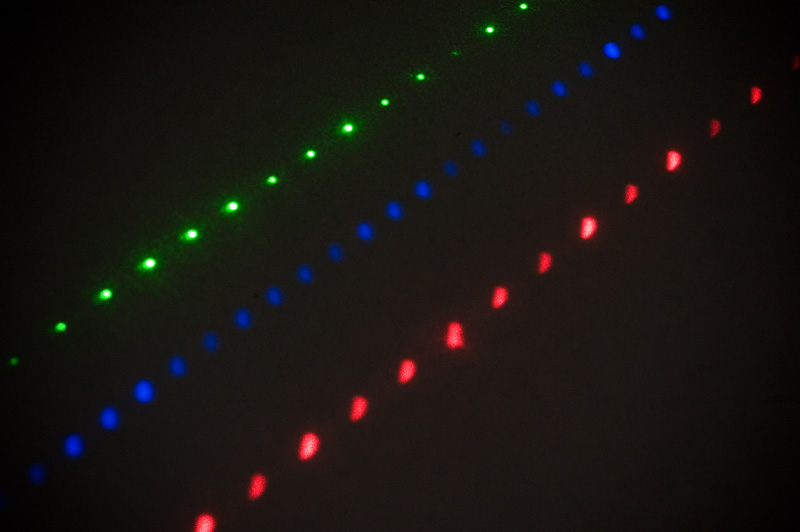 Thant has been a long history when people use flashlight for astronomy, and green laser pointer is a new variation of an old idea for many years.
Human eyes are most sensitive to green light. Usually the same measured output power of a red laser would not be as visible as green laser, since human eyes are not as sensitive to red light. Astronomy researcher and amateurs would choose green laser pointer as the only and the best choice for celestial observation tool.

Most pet owners would choose laser as a toy, but low powered red laser pointer lower than 5mW is your correct choice. Red laser pointer emits a moderate visible red beam, which is not harmful to pet’s eyes, even in case of direct contact. Laser should not be the only one toy for pet.

Laser radiation and reflection can cause vision damage. Damage is usually severe, and may result in blindness. Below are tips of protecting your eyes from lasers:

● Never let the laser beam and spot shine into your eyes. Avoid looking directly into the laser emitting hole. Never stare at laser beam while it is working.
● Pay attention while your laser pointer is pointed to smooth surface, such as water, mirror or metals. The laser reflective beam intensity may equal its beam intensity.
● Wear laser safety goggles to protect all kinds of laser radiations.